“Awesome!” was the consensus of the class.

I agreed. A few weeks ago Alan November, a technology guru, spoke at my school and showed us a wikipedia entry started by a third grade class. Now, like many, I’m pretty skittish about wikipedia as a research tool. However, Alan made a good case for it as a teaching tool and so curious I sought out the Charlotte’s Web entry. As soon as I saw the lousy plot summary I knew I had a very cool lesson to do.

And so yesterday I asked my class what they knew about wikipedia. One child immediately told us his mother had recently used it to find an article for a conference talk she was giving. She’s a physician so presumably she found what she wanted — an example of wikipedia working. However, another child admitted that it hadn’t helped him the year before when researching the Middle Ages.

Next I showed them the site and gave them a brief overview of how wikipedia works. At the Charlotte’s Web entry I showed them the history and how you could track the changes contributors had made. We compared the first entry to a more recent one and the children soon had a sense of how easy it was for anyone to create, contribute, or edit any wikipedia entry.

We then took a good look at that problematic plot summary. Here it is:

Wilbur is the pet piglet of a young girl named Fern Arable. On the morning after he was born, he was going to be killed by Fern’s father John, because he was a runt in his litter of 11. Fern manages to persuade her father to let her raise the runt, whom she named Wilbur. Unfortunately, when he grows into an adult pig, Fern is forced to take him to the Zuckerman farm, where he will be prepared as dinner in due time.

Charlotte A. Cavatica, a spider, lives in the space above Wilbur’s sty in the Zuckermans’ barn; she befriends Wilbur and decides to help prevent him from being eaten. With the help of the other barn animals, including a rat named Templeton, she convinces the Zuckerman family that Wilbur is special by spelling out such descriptions as “Some Pig” in her web. Charlotte gives her full name as “Charlotte A. Cavatica”, revealing her as a barn spider, an orb-weaver spider with the scientific name Araneus cavaticus.

Written in White’s dry, low-key manner, Charlotte’s Web is considered a classic of children’s literature, enjoyable to adults as well as children. The description of the experience of swinging on a rope swing at the farm is an oft-cited example of rhythm in writing, as the pace of the sentences reflects the motion of the swing.

The children were outraged at the inaccuracies. “It’s Mr. Arable or John Arable, not John!” “Fern does way more than ‘persuade’ her father!” “They named Charlotte twice and it isn’t that important anyway.” “His litter size is not important!” “It was really Charlotte who saved Wilbur, not all the animals in the barn!” “Pet piglet?” “He isn’t grown up when he goes to the Zuckerman’s.” “No spoilers!”

The children and I went through it on the Smartboard, marking up things we wanted to change. (As you can see, we wanted to get rid of most of it!) 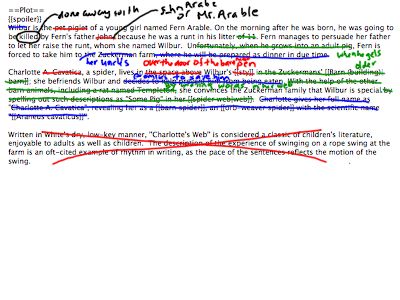 Then we rewrote it.

“Where’s Papa going with that ax?” asks eight-year-old Fern Arable to her mother one spring morning. It turns out that Mr. Arable is off to “do away with” a runty pig. Horrified, Fern softens him up and manages to save the pig. She names him Wilbur and tends to him as if she was his mother until he becomes too big and moves to Mr. Zuckerman’s barn.

Charlotte, a spider, lives over the door near Wilbur’s pen. She befriends him and, by weaving words such as “Terrific“ and “Some Pig” in her web, tries to convince the Zuckerman family that Wilbur is so unique that he cannot ever be killed for food.

Lastly I returned to the book’s wikipedia entry and replaced the old plot summary with ours. When I showed the children that it was on the wikipedia page for all to see the result was applause and the aforementioned, “Awesome!”

By now, less than 24 hours later, it has already been revised by someone else, but we are in the history now and you can still see our revision here!