My absolutely favorite film when a disaffected and alienated teen is finally out on DVD. This is Lindsay Anderson‘s If…., the partly realistic and partly surreal story of a group of young (and incredibly beautiful) boys rebelling in a 1960s British boarding school. Anderson was inspired by Jean Vigo’s 1933 film Zero de Conduite, also a surreal view of a boarding school rebellion. 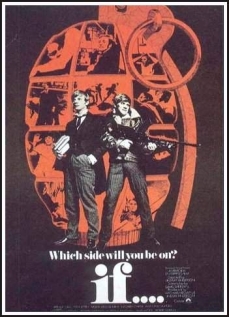 … and I also fell madly in love with the actor who played Mick, one Malcolm Mcdowell.

I’m dashing out shortly to see if my local video store has it so I can take it along to watch on the train to DC and to wave it at everyone I see so they will know to get it too. Oh, and if there is anyone interested in joining my Malcolm Mcdowell If…. Fan Club, let me know (as I will then email you a membership card). So far it is just me (president) and Brenda Bowen (member number two).