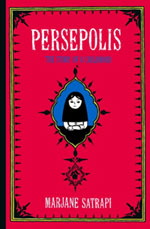 Like many I was wowed by Marjane Satrapi’s remarkable graphic novel memoir Persepolis. The buzz on the animated version was impressive, but I was still dubious. Not any more though. I saw the movie today and it was extraordinary — had me in tears several times along the way. Satrapi has done an incredible job and I highly, highly, highly recommend it.
Here’s a trailer to give you a taste:

In our celebrity culture where news is as often gotten from The Daily Show as from any more traditional source, the issue of do-gooding celebrities is complicated. In an interesting article in the National Interest on the issue, David W. Drezner points out how far more successful Gore has been as a celebrity than as a more conventional politician while also noting that not all look favorably on celebrity involvement.

Development expert William Easterly has argued that the celebrity focus on Africa’s problems has been misguided. By focusing exclusively on the diseases of sub-Saharan Africa, celebrities have unwittingly tarnished an entire continent: “[Africans are] not helpless wards waiting for actors and rock stars to rescue them.” Many African officials and activists share this sentiment, even heckling Bono at a development conference.

I’ve written here and here before about my feelings about celebrities and Africa. It still feels churlish to complain yet too often the result is not a better understanding of the issues, of the continent, or even better help. I’m not sure Drezner’s article changed my feelings, but it certainly gave me plenty to think about.

The next to be interviewed was Flashback the butler who, after taking them on an interesting but irrelevant excursion around a trivial incident in his childhood, gave no new information – except to say that Locked Room entered the library alone, and he heard the key being turned behind him.

Locked Room Mystery is dead. Who did it? When? Why? How? Read Jasper Fforde’s short story to find out!