For Those With Means

There’s a pretty impressive auction on December 9th at Bloomsbury Auctions including original work by Sendak, Steig, the Dillons and, (most impressive of all to my mind) Tom Feelings.  In fact, if you’ve got $250000 – $350000 or so in change, you could be the proud owner of this: 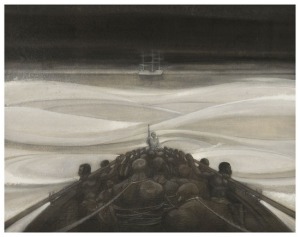 The Middle Passage: White Ships, Black Cargo. The entire suite of original mixed-media artwork, executed from 1993-1995 and published in the 1995 book. Comprising 58 pieces in 48 frames, mixed-media with tempera, pen and tissue, heightened with white and collage.

Tom Feelings’ masterpiece and the winner of the 1996 Coretta Scott King illustrator award. The Middle Passage: White Ships, Black Cargo takes viewers on a harrowing journey that begins on a peaceful morning in an African landscape. Upon the seige of a village by European slave-traders, the nightmarish voyage across the Atlantic Ocean to the New World, via the Middle Passage, is presented by Feelings in highly finished drawings and mixed-media collages, that, as is the published book, successfully convey the story of these Africans without text. Truly the masterpiece of Feelings ouvre, The Middle Passage is a tour-de-force of illustration genius. It grabs hold of a painful truth, of what it looked like when an African went from free to enslaved in a matter of hours. The images here incorporate the viewer in several complex ways: the disturbingly individual, images of guns pointed directly at the viewer and the men left to drown among circling sharks, to the incredible panoramas depicting groups of men being betrayed by the bejewelled African tribal leader, the crammed hold of the slave-ship, an attempted revolt, and the arrival of the ship to an awaiting colony. The final images nevertheless offer some signs of solace, visible in the pregnant woman, whose child represents the birth of African-American culture, and the sun that rises in the last picture which recalls the peace of the opening scene. In the words of Tom Feelings, “… If this part of our history could be told in such a way that those chains of the past, those shackles that physically bound us together against our wills could, in the telling, become spiritual links that willingly bind us together now and into the future-then that painful Middle Passage could become, ironically, a positive connecting line to all of us…”

“One night when speaking to a Ghanian friend, he asked, ‘what happened to all of you when you were taken away from here?’ I knew instantly what he meant ‘what happened to all our people who were forcefully taken from Africa, enslaved, and scattered throughout the “New World”?’ He was referring to all those Africans, our ancestors, viciously uprooted from their homes and taken by European slave ships on the hideous sea journey across the Atlantic Ocean. He was referring to this crossing called the Middle Passage.

As he continues to speak, muted images flashed across my mind. Pale white sailing ships like huge white birds of prey, plunging forward into mountainous rising white foaming waves of cold water, surrounding and engulfing everything. Our ancestors, hundreds of them locked in the belly of each of these ships, chained together like animals through the long voyage from Africa toward unknown destinations, millions dying from the awful conditions in the bowels of the filthy slave galleys.” Tom Feelings

A powerful, exhibition-ready education tool, this collection is paired with 10 framed textual pieces. All of the artwork is achivally held in plexiglass exhibition frames and has been outfitted with custom travelling crates. Also included are three different editions of prints taken directly from the original artwork, two of which are signed limited editions. There are over 1000 retail ready prints in this archive. This collection has been continuously and sucessfully exhibited for over 10 years. It has been installed at the United Nations in New York and the McKissick Museum at the University of South Carolina. A full exhibition list available on request.