This looks fun and, being nearby, may be something I attend.

MONSTER THROWDOWN:
A discussion of vampires, werewolves and Louisa May Alcott
moderated by Pulitzer Prize winner John Matteson
on May 6th at Symphony Space

Lynn Messina, coauthor of Little Vampire Women (HarperTeen), and Porter Grand, coauthor of Little Women and Werewolves (Random House), sit down with John Matteson, author of Eden’s Outcasts: The Story of Louisa May Alcott and Her Father (W.W. Norton), which won the 2008 Pulitzer Prize for Biography on May 6 at 7:00 p.m. at the Leonard Nimoy Thalia Theater at Symphony Space (2537 Broadway at 95th Street).

The evening will be introduced by Ron Hogan, of Beatrice.com, the well-known literary blog, which is presenting the event. The discussion will explore their mash-ups of Alcott’s classic, Little Women. Both authors will address the challenges they faced reworking the text. Alcott’s own work, published under various pseudonyms, included many sensational elements such as spies, murderers, drug addicts and mummies, and Matteson will explore whether inserting vampires and werewolves into the beloved story would be truly anathema to the author.

In writing Little Vampire Women, Messina insists that she was just following Alcott’s lead. Messina says, “I found the inspiration for the book in chapter eleven, when malaprop-prone Amy calls her Aunt March ‘a regular samphire.’ ‘She means vampire,’ corrects Jo. I was absolutely stunned to see the word vampire in Little Women. I knew vampires weren’t a modern creation, but it still surprised me to realize that they were mainstream enough in the 1860s that Louisa May would drop it into a book.”

Grand, on Little Women and Werewolves says, “Bronson Alcott, Louisa May’s father, was a staunch vegetarian who forbade his family to eat meat and preached ‘without a flesh diet, there would be no blood-shedding war.’ The family obliged Bronson in this, as in all things, but once Louisa May’s writing put her in a position of financial comfort, she ate a great deal of meat. It is quite fitting then, that carnivorous werewolves have been added to the very novel which had put her in the situation to eat all the meat she craved.”

John Matteson says, “With a teenage daughter in the house, I have been alternately intrigued and scandalized by the vampires-in-literature craze. But Louisa May Alcott herself loved writing thrilling tales, and I think it’s nice for people to know that Alcott fans can enjoy something more lurid and exciting than the proper folding of pocket handkerchiefs.”

The event will be held at Peter Norton Symphony Space’s Leonard Nimoy Thalia Theater on May 6 at 7:00 p.m. Symphony Space is located at 2537 Broadway (at 95th Street). Tickets are $10 and available through SymphonySpace.org.

Lynn Messina is the author of four novels, including the best-selling Fashionistas, which has been translated into 15 languages and is in development as a feature film. She attended Washington University in St. Louis, where she studied English Literature. She lives in New York City.

Porter Grand, a Cleveland native, holds an AS in liberal arts, a Bachelors degree and a Doctoral in Theology. She has worked, among other jobs, as a waitress, bartender, carnival barker, go-go dancer, shampoo girl, welfare caseworker and Reference Librarian, and now writes daily in her Huntsburg, Ohio, farmhouse.

John Matteson is a Professor of English at John Jay College of Criminal Justice of The City University of New York. He is author of Eden’s Outcasts: The Story of Louisa May Alcott and Her Father (W.W. Norton), which won the 2008 Pulitzer Prize for Biography. He is currently at work on a biography of Margaret Fuller, also to be published by Norton.

I’m a die-hard “Lost” fan and am fascinated by the books seen in various episodes.  Alice came up seasons back, but the most recent episode had, of all things, Watership Down.  Are they red herrings, these books, or will we find out when the series is over that they all are significant clues?

Thanks to Eric Carpenter I learned that a quote from this blog was used for the Australian edition of When You Reach Me.  Alice and I are very flattered. 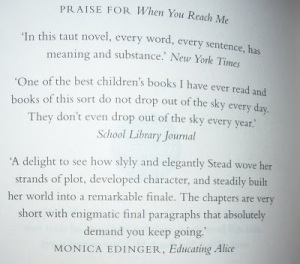