Learning About Africa: Going Back to Sierra Leone

Next Friday I’m heading back in time, so to speak.  That is, I’m going back to Freetown, Sierra Leone, for the first time since I left in 1976 after two years as a Peace Corps Volunteer.  My emotions are very complicated as I went to Freetown straight out of college, age twenty-one.  I was part of a large group of Peace Corps Volunteers serving in Sierra Leone at the time along with a number of British (VSO) and Canadian (CUSO) volunteers.  I can’t speak for all of them, but for me it was a seminal experience in my life.  So going back after so long and after a horrendous conflict is scary.  Will it seem familiar?  (I know the Cotton Tree will be even if the City Hotel is gone.) Will Krio come back to me?  (Kushe-o… How de body?…) My way around town?  Bargaining for a taxi? (Remembering that instead of it being two leones to the dollar it is now 4, 357.05 leones to the dollar.  Talk about inflation!) 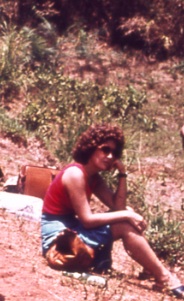 Here’s my twenty-one year-old self upcountry circa 1976

I’m going for a meeting of the Friends of Sierra Leone, a group that came together when things were first falling apart in Sierra Leone and no one in the world media seemed to be paying any attention.  I remember several difficult meetings at the Sierra Leone Consulate here in NYC with Sierra Leoneans hopelessly talking about what we could do.  It took an invasion of Freetown for the world media to finally take notice and then it was mostly about child soldiers, blood diamonds, and amputating limbs.  Around that time I did a project with my fourth grade to raise money for Sierra Leone and draw attention to other aspects of the country than had been in the news to date.

In 2000 the Friends of Sierra Leone held its yearly meeting at Mystic Seaport to celebrate the Amistad. The replica of the ship was just completed and the museum had several exhibits about the captives and their stories.  While preoccupied with events in Sierra Leone I noticed that there had been children on the Amistad (something Spielberg left out of his movie) and later became obsessed with learning all about them (as they all came from what is now Sierra Leone). That turned into my story about Sarah Margru Kinson which is to be published by Candlewick Press in a couple of years (as it is an interactive book with envelopes and such it is complicated to create so while the writing is long done the designing and illustration is just getting underway).

The reason for this meeting is to celebrate Peace Corps return to Sierra Leone.  They had been there since the 60s, but were pulled when things go too dangerous in the mid-90s.  The Friends of Sierra Leone lobbied tirelessly to get Peace Corps to bring them back and finally last summer the first cohort returned and a second group is starting their training now.  And so we will be in Freetown shortly meeting with the current volunteers, returned volunteers (what Peace Corps calls those of us who served), family members of current volunteers, Sierra Leoneans who are also members of the organization, and many others.  If the weather prevails (it is the rainy season so who knows) we will visit Bunce Island, a notable slave fort that has great meaning and significance.  (I’ve always rued that I missed my chance to go during my own Peace Corps training because I was sick reacting to a shot of some sort —we got many.)  We will visit a school we’ve supported as an organization and help at another one.  Hopefully I will also visit the school I taught at, still there after all these years.

I will take photos and hope to blog as well — this grand adventure of mine.

11 responses to “Learning About Africa: Going Back to Sierra Leone”