Of the many infamous slave castles that existed along the coast of West Africa, Sierra Leone’s Bunce Island is the most historically significant for the United States. While the slave traders at others of these dreadful places were sending captives throughout the Americas, the 18th century British traders of Bunce Island were specifically targeting, warehousing and then shipping thousands of Africans to the Southern Colonies of what is now the United States. Rice farmers in Georgia and South Carolina especially were looking for captives from the Rice Coast, an area that included what is now present-day Sierra Leone. Traditional rice farmers, they were much desired.

Anthropologist Joseph Opala, with whom I served in the Peace Corps, has researched the Sierra Leone – United States connection for over thirty years. In addition to Bunce Island, he helped to show links between the Gullah and Sierra Leoneans and continues to be an important scholar and advocate for Sierra Leone and the country’s historical connections to the United States. Even more connections are coming to the fore as many African Americans are learning through DNA testing that their ancestors came from Sierra Leone, very likely through Bunce Island. Say actor Isaiah Washington who, after learning of his Sierra Leonean DNA, gained his Sierra Leonean citizenship and contributes financially and emotionally to the country as well as to the development of Bunce Island as a historic site for visitors. 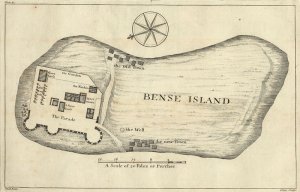 Having a chance to experience Bunce Island myself a few weeks ago after having read and learned so much about it was a remarkable experience. I’d been to Senegal’s House of the Slaves years ago and was certainly very moved by that experience, but found Bunce Island even more moving.  The overgrown ruins of walls, towers, captive pens, graves, and other vestiges of the horrors of what happened there made experiencing it firsthand something I won’t ever forget. 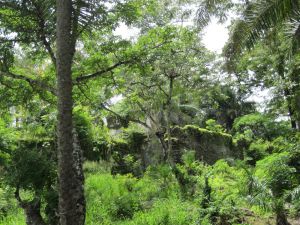 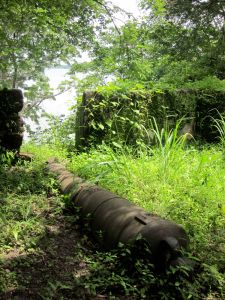 Facing out defensively are a bunch of cannons 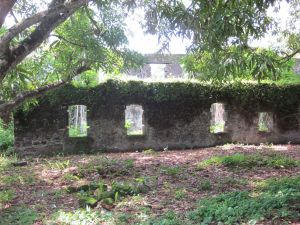 A wall of the interior house. our guide Amadu Massally told us of a visitor who looked out her window, was horrified by the captive pen she saw, and so wrote about it as an abolitionist upon her return to England. 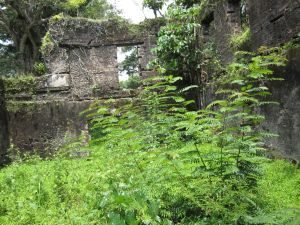 One of the pens for captives 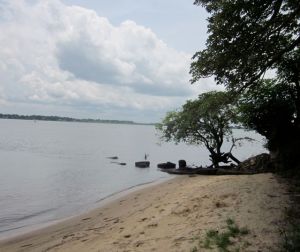 The original jetty from which captives were taken by canoe to the slave ships.

For now Bunce Island is still somewhat off the usual African tourist path (as is Sierra Leone), but hopefully for not too much longer.  Efforts are underway to make it more accessible and a destination as significant as others on Africa’s west coast.  You can learn more about Bunce Island here and by exploring the various links here.