From our intrepid leader, Amadu Massally:

…in the Sierra Leone River and thereby discovered Friends of Sierra Leone Island.  This is newsworthy and in fact book-worthy.  The SL River, being the largest natural harbor in Africa (and 3rd largest in the World) holds hostage 47 Americans.

On Thursday June 23rd, I had the opportunity to take 47 Americans and 8 of us Sierra Leoneans to Bunce Island.  We used a ‘Pampah’ (local boat) rented from the most popular boat transportation company in Freetown today, Pelican, to travel the route as our American friends most of them former or Returned Peace Corps and Current Peace Corps volunteers wanted the authentic experience.  There were a few parents of current Peace Corp Volunteers among us.

So I led the tour of Bunce Island and we had a good time.  On the way back however, with two Captains from the reputable company, we got stuck on a sandbar (think dirt bar in this case).  And very quickly, by the time most people jumped out to push, the water went from knee deep to ankle to dry, dry…

I do not want to tell the rest of the story just yet, because it will be written by a few people I hope, in an article sooner rather than later.

But I wanted to share one of the photos and felt obliged to introduce what may have turned out to be the most memorable experience of the Friends of Sierra Leone return to the country for their own 50th Birthday of the program in SL and worldwide.  Arguably, even more so than meeting with President Koroma.

Here are three more photos from me, Monica (and I was one of the last off the boat, I admit, as I feared greatly messing up my sad knees and back jumping down and trying to get back in): 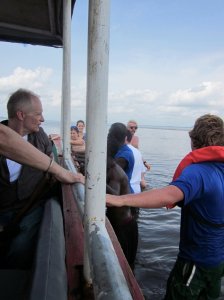