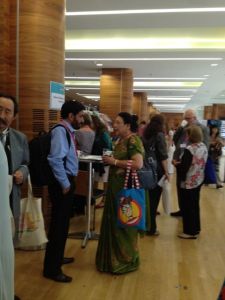 This truly international nature meant that there was simultaneous translation from a booth near the front of the stage; sitting farther up I could still occasionally hear it through my neighbors’ headphones. 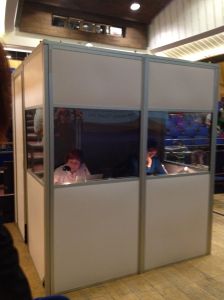 The Opening Ceremony began with a completely charming performance by children from Theatre Peckham of an excerpt from their recent production of The Miraculous Journey of Edward Tulane by Kate DiCamillo. I tweeted, “Adorable children doing Edward Tulane with song and Commonwealth accents.” This was followed by a tea sponsored by Walker Books (Candlewick’s counterpart in the UK) where I had a chance to run across all sorts of folks I knew (some I hadn’t seen in years) and to meet many wonderful new people as well.  Throughout the days of the Congress I kept encountering people I’d met long ago, others that knew this blog, and still others whom I only knew from their writing or other work with children and books.  I think this may have been the best part of the Congress. (Say at breakfast speaking with a book publisher from Ghana.)

We then returned to the auditorium to hear three UK Children’s Laureates, each providing a different perspective.  First up was the delightful raconteur, Michael Morpurgo, an imp in red sneakers who gave the history of the UK children’s Laureate and ended by singing a song from the stage production of his book War Horse, almost convincing me to see it (as I’ve resisted feeling it would be too weepy for me).

Next up was former Children’s Laureate Anthony Browne (who looks in person as he does in photos with his 60s mophead:) who focused on his illustration, speaking of his “shape game,” and his development as an artist.  The money tweet I got from his speech was: “Shouldn’t drag children from picture books too soon.”

Last was current Children’s Laureate, Julia Donaldson who was great fun indeed, focusing on the performance aspects of her books and stories.  She has a background as a busker and, with her husband on guitar, did a bunch of incredibly fun songs and stories, one involving members of the audience. 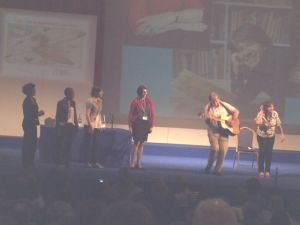 The evening ended with a presentation of the IBBY-Asahi Reading Promotion Awards 2012 followed by a reception.

One response to “IBBY Congress Day One”