Just came across this photo from the Ender’s Game movie with Hailee Steinfeld as Petra (loved her in True Grit) and Asa Butterfield (loved him in Hugo) as Ender.  So far so good, but you never know with movie adaptations, do you? 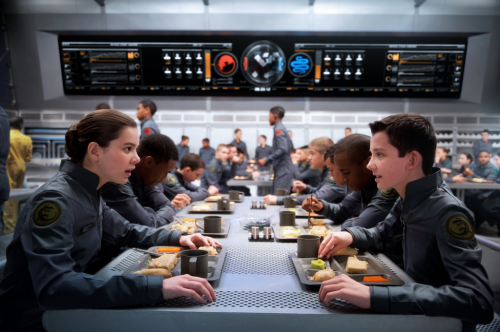 So the judges have all been announced (and even if you don’t read all their bios, do go read our Big Kahuna’s — Frank Cottrell Boyce — as it is a hoot) and today we reveal the brackets. That is, their specific matches. And tomorrow we open the Undead Poll — our viewers chance to bring back their favorite book for the final Big Kahuna round.

Just to again say — the idea behind the BoB is to create a structure that allows us all to revisit books from last year and consider them alongside some mighty distinguished writers. Over the years we’ve had amazing ones and their decisions are always thoughtful, provocative, and well worth reading no matter what you think about pitting book against each other and such.

More Mulling on the Nonfiction/Fiction Conundrum

… I’ve been thinking about how children take in history for many, many years (written some books and articles about this) and the issues of authenticity and authority are complicated. I’ve seen errors in nonfiction books  that were highly lauded, that appear to be absolutely perfect, only because I was an expert on the subjects. As you note, writers of history have to shape and consider what to include and what to leave out so the act is not as pristine as may be thought.

I’ve just read Andrea Cheng’s ETCHED IN CLAY: THE LIFE OF DAVE, ENSLAVED POTTER AND POET, a fictionalized, multi-voiced, poetic exploration of what this enigmatic artist’s life (there is so little firsthand material about him) might have been like. Kirkus gave it a star and describes it as “verse biography.” I see it as belonging in the same area as Nelson’s book, another fictionalized biography.

A few weeks ago I attended a session about nonfiction for children at the New York Public Library. One of the issues that came up was how to make these stories engaging and accessible for young readers. One author spoke of fictionalizing one aspect in her otherwise nonfiction book and writing about this in the back matter as a solution. Another panelist said she would not have done this, feeling a nonfiction book should be only nonfiction, I’m guessing. Illustration came up too — an artist in one case had to imagine a significant person in a picture book biography because she was unable to find any images of her.

These stories and others just make me think again and again that the telling of history is not something that can be firmly one thing or another. There are reasons to fictionalized true stories in ways that aren’t  those of the historical fiction novelist. The novelist is firstly telling a story that happens to be set in the past. The story is front and center. Dickens’ A TALE OF TWO CITIES is firstly a heartrending story; I don’t think we expect to learn a whole lot about the French Revolution reading it. But others are writing about historical situations that they want known most of all. That these lightly fictionalized works end up being in the same category as works like Dickens’ seems very odd to me. (I guess this goes way back to me railing against the use of historical fiction to engage kids in history — way, way, way back on this list:)

And I’ve got a dog in this fight. Like Nelson and Cheng I wanted to get a person’s story out, someone for whom firsthand information is limited (Sarah Margru Kinson, a child on the Amistad). I tried for many years to write it as nonfiction, but the editors I worked with felt the individual always seemed too distant for the child readers and so, with enormous trepidation, I crossed the border to fiction. I suppose it will now be termed historical fiction, but I’m uncomfortable with that because the story is still as true as I could make it and I want children to know that. I don’t see them engaging with the book as they would a work of fiction, but more as a true story. Possibly like readers will with Nelson and Cheng’s works.

It seems to me that these stories need to get out there to children. That the historical record is slanted toward those in power, that the lack of the significant source trail that we require and demand should not be obstacles in getting these stories out there. When it comes to those enslaved from Africa we see a limited number of stories over and over because those are the ones for which there are records and sources. But there has to be a way to get more stories out there and it may be we have to look at that funny place between fact and fiction as one place to do it.

Filed under Africa is My Home, Historical Fiction, History, Nonfiction

New York City’s celebrated Grand Central Station is 100 years old this year and still as gorgeous as ever — well worth a visit even if you aren’t actually going on a train somewhere. And to celebrate this milestone birthday there are all sorts of events, among them an exhibit of original art next month to which Peter Sis has contributed the following, a tribute to his editor Jackie Kennedy Onassis who was among those who helped save the station from demolition. 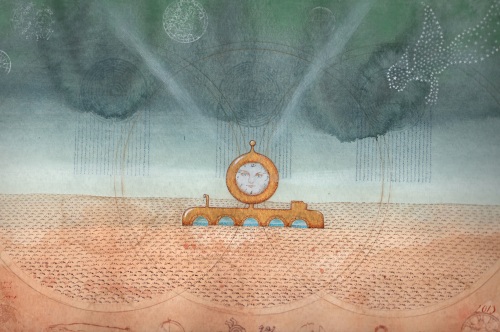 It All Started With A Book…

I  loved the London production of the Matilda musical and am so lucky to have been invited to one of the first performances of the Broadway version. Can’t wait!

Some Words from a Few Past Newbery Winners

“I got my name in a crossword puzzle.”

That’s Betsy Byars on winning the Newbery. More in this lovely video from Open Road Media on some of their award winning authors, among them Virginia Hamilton, Jean Craighead George, and Chris Raschka.

In the Classroom: A Few Classroom Teaching Suggestions from an Introverted Teacher

I’d been aware of Susan Cain, but hadn’t really looked into her until now, prompted by the recent todo regarding the teaching of introverts. In her Ted talk , she reinforces a number of my beliefs and practices as a veteran  introverted teacher. Here are some of them:

Filed under In the Classroom

In The Classroom: An introvert teaching every sort of kid.

Thanks to Liz Burns who led me to the article “Introverted Kids Need to Learn to Speak Up at School.” written by an extroverted middle school teacher.  I’m an introverted middle school teacher, shy on top of it*, and so have a very different take on this.  First of all, not every part of the world or culture necessarily views outspokenness as necessary as we often do in the United States.  I’ve had teachers complain about children who do not look them in the eye when those children come from cultures where doing so is considered impolite.  Secondly, as someone who feels her best way of communicating is by writing, I think it is important to acknowledge and respect all ways of sharing our views and knowledge.  Of course, we teachers do need to support all our students, provide safe ways for them to speak up, to help those who are reticent to feel confident to make the occasional comment, but to make that a requirement, to grade it, to privilege that as something necessary for success, I don’t agree.

* My admission of being shy may be a surprise to those who know me in the children’s lit world, but  out of my element, in a situation where I don’t know anyone, I am very different.

Filed under In the Classroom

Thanks to Travis who drew my attention to the post “The Biebs and Ivan Connection” in which the author points out the new role social media is playing in our book world, noting the way John Schumacher and Colby Sharp fell in love with  The One and Only Ivan and enthusiastically got the word out on Twitter, blogs, and elsewhere. As a result the book was well-known and there was a lot of hope that it would win the Newbery. That it did is indeed wonderful, but I feel strongly that it is important to recognize that it did for reasons other than social media.

It won the award because the Committee took a very hard look at it alongside many other books and decided it was the best. That there was a huge social media fandom behind it had nothing to do with it.  Keep in mind that R.J. Palacio’s Wonder which had a similar social media fandom behind it, was not recognized nor was John Green’s The Fault in Our Stars recognized by the Printz Committee even though it had at least as  large if not larger fan base than either Ivan or Wonder.  (John Green’s fans, known as Nerdfighters, are a social media force to be reckoned with.)

One of the points I made in my Nerdy Book Club post, written before this year’s announcements, about the Newbery award was that:

10. Popular! Not.
Often through word-of-mouth and, these days, through social media, certain beloved titles are passionately admired and advocated as Newbery front-runners. The dismay when they are not recognized can be great. I’ve been there — standing open-mouthed when a well-known book I loved, one that I thought surely would be honored, was not. But it is important to know that the rules the members of the committee are required to follow clearly state that the award is “…not for didactic content or popularity.” That is, the committee cannot take into consideration a book’s crowd-pleasing aspects. And so if tomorrow one or more of this year’s especially well-loved books (you know which they are!) are honored, their popularity will not have been one of the reasons. And if they are not, don’t feel sad — these books will unquestionably continue to be honored by all of those who love and admire them.

What social media IS doing in a wonderful way is getting the word out about books and that is absolutely fantastic! As the result of John, Colby, and so many others this year’s Newbery winner may well be more widely known than winners in previous years and I love that. Forget about old media like The Today Show which decided to drop their interviews with the Newbery and Caldecott winners a few years ago — new media is where it’s at!

SLJ’s Battle of the Kids’ Books — Judges are Coming!

Today we begin announcing the judges and the first one is here!

Filed under Battle of the (Kids') Books