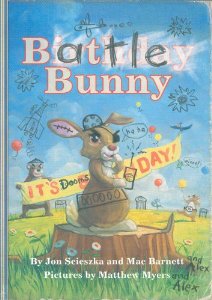 I am a big fan of subversive books, say the “recommended inappropriate books for kids” featured in Lane Smith’s Curious Pages.  That said, I also have observed that kids respond better to some of these more than others, an issue I explored years ago in a Horn Book article “Pets and Other Fishy Books.” So when I ran into Jon Scieszka a few months ago and he excitedly told me about the forthcoming Battle Bunny, I was intrigued but also wary — was this a book kids would get or would it be something more amusing for adults? Then an advanced copy of the book showed up in the mail and I took it to school to see what my students thought.

First of all, let me try to explain just what it is (and how tricky it was to read aloud). If you look at the cover above you can perhaps see that it appears to be a sweet book of the Golden Book sort, originally titled Birthday Bunny, that has been erased, scribbled on, and reworked by…someone. I began by showing the cover to the kids and we discussed what that original book was; some of them knew Golden Books, but all of them appreciated that it was meant to be one of those sweet little journey books they’d all read when very small. Next we explored the scribbles — evidently someone named Alex had received the book from his grandmother for his birthday (there is an inscription on the inside front cover), wasn’t too happy, and decided to make it into a completely new story. And so he thoroughly erased the original title and put his own in instead. As for the interior, he crossed-out text, added new words and art, and turns the story into something completely different.

The first day I tried reading the book aloud on my own— alternating between the original text and Alex’s. The next day I invited one child to join me, reading Alex’s story and then had the kids take over completely — one reading Birthday Bunny and the other reading Battle Bunny. They had a great time!  It may well be that the best way to take in the book is solo or with one other child, but I still think it was a blast to read this way. The group reacted, pointed out small things to one another, and just had a lot of fun. Jon tells me they are planning on providing a copy of The Birthday Bunny online for kids to print out and rework just as Alex did.  Great idea!

So for those like me who go for this sort of thing (and not everyone does, I know),  Battle Bunny is an excellent addition to the world of subversive books for children.

Betsy Bird has a charming contest inspired by Sophie Blackall’s remarkable mailing, of hers and Matthew Olshan’s book The Mighty Lalouche, to a bunch of folks in the old-fashioned way — wrapped in brown paper with string accompanied with a letter sealed with wax. Having received one of these lovely, lovely packages I’m not going to participate in Betsy’s contest, but urge others to do so. And even if you don’t wish to do so, I highly recommend reading the contributions there already. They are varied and all so moving!

My own memories of packages are many. First of all, as a child living in East Lansing, Michigan where my father was a young professor, I recall the periodic packages that would come from my grandfather in New York City, filled with food that my parents loved and could not find in the Midwest — largely German as that is what they were.  And then there were the packages my parents sent to me when I was in the Peace Corps in Sierra Leone in the 1970s. I think there was also food in those, but most of all I remember toothpaste, the brand I liked which was unavailable in Freetown.

I need to ask my 4th grade students about their experiences with packages. Maybe at camp?  Certainly, they aren’t receiving letters the way I did as a child.