Africa is My Home: Speaking and Signing in Farmington

Yesterday I had a splendid time speaking and signing at an event organized by the Farmington Historical Society and the First Church. It was held in the church’s Amistad Hall and the attendees were so well-informed about the Amistad affair and Sierra Leone that it was very special experience indeed. My great thanks to all those who organized this so beautifully.

Speaking with an attendee who was originally from Sierra Leone.

They brought a Mende Bunde Mask that looks very similar to the one on the cover of the book and a footwarmer that might have been used in the church when Margru was there. 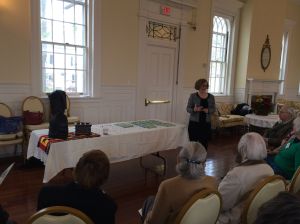 Before and after the event my friend and I revisited some of the Amistad sights we’d seen during our previous research visit so many years ago and finally found the grave of Fone, one of the Amistad captives who died during their time in Farmington.

Filed under Africa is My Home