Kalte Krieg and Kaisers, My Trip to Berlin

I’m German Jewish — my parents left Germany as teens due to the Holocaust, but my father then became a specialist in post-war German politics. As a result we visited and lived there a lot when I was a child. I’ve close family friends and third cousins galore there. (We also have the results of the Holocaust. My grandfather was deported and killed; my nationalistic great-aunts who couldn’t imagine what was happening commit suicide rather than being deported; others went to England and Brazil;and some ended up in, but survive the camps.) My mother cooked German food. We did Christmas and Easter. I wore dirndls. I was required to knix to adults when I shook their hands. And so I often returned to German as an adult.  I speak a messy childish German, but fairly fluently. If I lived there I’d quickly become truly bilingual.  But until last week I hadn’t been there for a long time — the last visit was with my father  in 2005 to his hometown of Frankfurt to celebrate my great-grandfather’s 150th birthday and his Edinger Institut.

Craving some time in Germany I went to Berlin last week. I’d been there three times before, the first in 1965 when I was eleven with my mother who was from there. She left in early 1939 and so I was absorbed during that visit seeing where the family home had been in the Tiergarten,  visiting to her school, seeing the Wall and having her tell me how different the streets were when the city was whole, going to East Berlin, and much more.  I first returned in 1992 and was amazed to get a sense of the whole city as that had not been possible with the Wall.  There were destitute former Soviet soldiers everywhere, I recall, and a strong sense of the differences between East and West. While less pronounced, that sense was still there when I went again in 1999.  This time though it seemed almost completely gone.

What struck me most was how similar Berlin now is to other big cities — so many of the stores and such are the same everywhere. Happily there were still aspects that were distinctly German — all the wurst, the afternoon tradition of coffee and cake, and so forth.  What also struck me was the incredible focus on the DDR as history. That was absolutely fascinating to me.

My excellent hotel was just down the street from Checkpoint Charlie. the best-known crossing point between West and East Berlin during the time of the Wall. When I was in Berlin in 1965 we traveled between the two parts of the city by subway so I had never even seen this bit of the city until last week. And found it to be a good example of the way the Cold War has become a tourist attraction, partly well–presented via thoughtful museum exhibitions and partly incredibly kitchy. The later absolutely fascinated me.

For example, you could get your picture taken (for a small fee) in front of a re-creation complete with sandbags and men dressed up as soldiers.

Or buy an “authentic” piece of the Wall. How these are certified as authentic I can’t imagine. Awfully interesting that all of them have color on them. The piece I have (given to my father right after it came down from someone who was there) is grey. After all, only some of the wall was graffitied and much of it was just plain concrete and brick like my piece. Say like this section below.

Lots of fake gas masks, helmets, and uniforms to buy.

Even the local MacDonald’s had a Wall graffiti decor. Outside on the terrace were khaki-colored umbrellas. 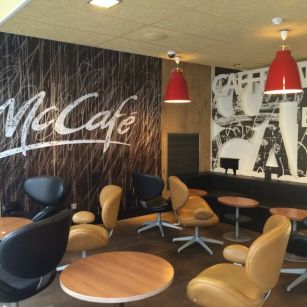 Also related to the Cold War, but in a completely different way was the abandoned amusement park at Spree Park. Tours (in German) are available on the weekend so I went on one. And I discovered that it is all about DDR nostalgia. The guide and many of the others on the tour had been to the park when it was open. So they were there to remember. Others were there because they are simply fascinated by DDR life. As far as I could tell I was the only non-German in the group.  Fascinating in two completely different ways.

Having just seen the Divergent movie and read the book at last, this now makes me think of that!

At the train station near the park we came across a Berlin St. Patrick’s Day celebration.  A bit odd to say the least.

Having been raised with German food and fond memories of it in Germany itself, I was glad to see many aspects of it still intact. For instance, German Starbucks, along with the usual global fare,  have German-specific cake for the afternoon ritual known as “Kaffee und Kuchen.”

And there is still loads of wurst everywhere!

At the wonderful 6th floor of the KaDeWe department store I discovered that Germans see candy canes as a yearlong delicacy.  (I should say I stocked up on Haribo, a beloved childhood treat, as the German-made bears taste very different from what is available in America.)

Fun to see the German editions of this. Translates as “The Tribute from Panem: Deadly Games.”

We spent the final day on a tour of Potsdam. I’d been there in  1992 when it was still full of destitute Russian soldiers selling whatever they had. (I’ve a couple of pins.)  The German government finally, a couple of years later, paid to send them home since Russia wasn’t about to.  This time the tour was about the Cold War and Kaisers (the Kalte Krieg and Kaisers of the post heading).  Our guide gave us this and told us to study up as there would be a test at the end. I actually found all the stuff about Fredrick the Great and his relatives to be completely fascinating. But the Cold War stuff was equal to that. Again, the tour seemed to be 99% Germans there for nostalgic reasons. 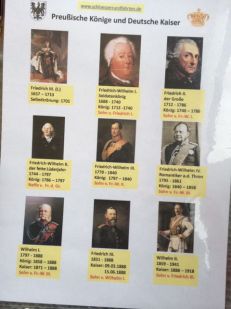 This was where the Potsdam Conference took place; where  Churchill, Stalin, and Roosevelt divided up Germany and sort of the first bit of what would become the Cold War. Check out the Soviet red star in this very old space.

Not the circus that was Checkpoint Charlie, but equally important — at the Gienicke Bridge, prisoner trade-offs occurred causing it be called “Bridge of Spies”. 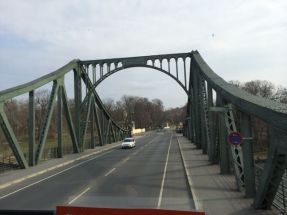 Then there was the Kaiser part of the tour, focusing on Fredrick the Great and his summer palace, Sanssouci.  It is gorgeous, but my photos aren’t so I suggest going elsewhere if you want to get a feel for the place. I was again moved by his burial with his dogs. Those little things are potatoes because evidently he popularized them in Germany. 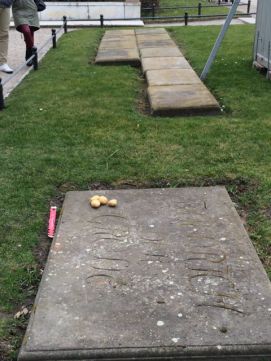 They are cleaning a lot of the statuary, but all I could think of seeing these was Dr. Who’s weeping angels.

We did a bunch of other fun things. Say attending  the Berliner Ensemble‘s current production of The Three Penny Opera, directed by Robert Wilson. It was fabulous, but also — what a wonderful theater!  We had something to drink beforehand in the canteen and saw many of the actors in make-up scarfing down meals before starting.  There were photos in rooms around the theater including this one of their original production. 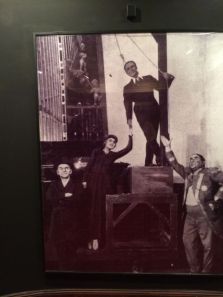 Afterwards we had dinner at the nearby Ständige Vertretung. The name refers to the office of the Federal Republic of Germany in East Berlin during the Cold War when they couldn’t have an embassy or anything like that. The food is very much of Rhineland which is where my friends are from and where I lived as a child.