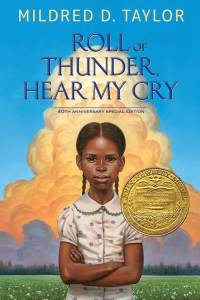 (New York, NY – September 8, 2015) — Penguin Young Readers is thrilled to announce a 40th anniversary edition of the Newbery Award-winning ROLL OF THUNDER, HEAR MY CRY by Mildred D. Taylor. With more than 6.5 million copies in print, this masterpiece will have all new covers from Caldecott Winning illustrator Kadir Nelson. The 10 book deal includes covers for Ms. Taylor’s entire backlist and a future hardcover due from Viking in 2017. World rights, all languages were negotiated by Eileen Kreit, publisher of Puffin, and Steven Malk of Writers House. The hardcover anniversary rejacketed edition will publish in January 2016 with the complete backlist to follow in paperback in April.

Set in Mississippi at the height of the Depression, this is the story of one family’s struggle to maintain their integrity, pride, and independence in the face of racism and social injustice. It is also the story of Cassie Logan, an independent girl who discovers over the course of an important year why having land of their own is so crucial to the Logan family, even as she learns to draw strength from her own sense of dignity and self-respect.

Ms. Taylor says, “ROLL OF THUNDER, HEAR MY CRY was created from a story my father and my uncle told me while we sat at the dining room table. From the time I was a child, I heard family stories and family history. I have woven all those stories and all that history into ten books, including the book I am now writing, LOGAN, the concluding book of the Logan family saga. I consider my books a legacy to my family, and I believe all those who shared the stories and who lived the history would be as proud as I of the 40th anniversary of ROLL OF THUNDER, HEAR MY CRY, a book begun with a story told around the dining room table.”

“I’m so thrilled to have the opportunity to create new covers for this powerful series by Mildred Taylor,” says Kadir Nelson. “The ROLL OF THUNDER series resonates so deeply with me and I’m very proud to help introduce this saga to a new generation of readers.”

Don Weisberg, President of Penguin Young Readers, said, “ROLL OF THUNDER, HEAR MY CRY has become a part of our country’s literary history, enjoyed by generations of readers. It’s a privilege to be part of this publishing legacy, and we’re excited to celebrate the upcoming anniversary and new addition to the Logan family saga.”

ROLL OF THUNDER, HEAR MY CRY was first published in January 1976, and was followed by eight additional novels to form the Logan family saga. These titles – Let the Circle be Unbroken, The Road to Memphis, Mississippi Bridge, Song of the Trees, The Friendship, The Land, The Well, The Gold Cadillac – will be rejacketed with original art by Kadir Nelson for release in April 2016. The final book in the Logan family saga will be released by Viking in 2017.

Mildred D. Taylor is the author of nine books including The Road to Memphis, Let the Circle Be Unbroken, The Land, The Well and Roll of Thunder, Hear My Cry. Her books have won numerous awards, among them a Newbery Medal and Germany’s Buxtehude Bulle Award (both for Roll of Thunder, Hear My Cry), four Coretta Scott King Awards, and a Boston Globe—Horn Book Award. Her book The Land was awarded the L.A. Times Book Prize and the PEN Award for Children’s Literature. In 2003, Ms. Taylor was named the First Laureate of the NSK Neustadt Prize for Children’s Literature. In 2004, Mississippi celebrated a Mildred D. Taylor Day, and Mildred Taylor returned to her roots to address several hundred school children and adults at The University of Mississippi.

Mildred Taylor was born in Jackson, Mississippi, and grew up in Toledo, Ohio. After graduating from the University of Toledo, she served in the Peace Corps in Ethiopia for two years and then spent the next year traveling throughout the United States, working and recruiting for the Peace Corps. At the University of Colorado’s School of Journalism, she helped created a Black Studies program and taught in the program for two years. Ms. Taylor has worked as a proofreader-editor and as program coordinator for an international house and a community free school. She now devotes her time to her family, writing, and what she terms “the family ranch” in the foothills of the Rocky Mountains.

Kadir Nelson is a two-time Caldecott Honor Award recipient. He has received an NAACP Image Award, a CASEY Award, the 2009 and 2014 Coretta Scott King Author Award, and the 2009 Robert F. Sibert Informational Book Award. Among Mr. Nelson’s other awards are gold and silver medals from the Society of Illustrators. His work has appeared in The New York Times, Sports Illustrated, and The New Yorker. He lives in Los Angeles.

LET THE CIRCLE BE UNBROKEN

THE ROAD TO MEMPHIS

SONG OF THE TREES