LL I wondered how you measured success. I read your Wikipedia because we were doing this…

JR Oh God, have you read it? I’ve never read it. I’ve read yours.

LL No spoilers, but as far as all the traditional metrics go, you’re fucking acing it.

From this very entertaining conversation.

There’s a stage production of Cornelia Funke’s fantasy, Inkheart, about to open in Manchester, England.

A visually spectacular drama from acclaimed director Juan Antonio Bayona (“The Impossible”), based on the award-winning children’s fantasy novel. 12-year-old Conor (Lewis MacDougall) attempts to deal with his mother’s (Felicity Jones) illness and the bullying of his classmates by escaping into a fantastical world of monsters and fairy tales that explore courage, loss, and faith.

Yesterday I was delighted to be at a very special event honoring the illustrators whose books I helped select, along with Marjorie Ingall and Frank Viva, for the  New York Times Best Illustrated Children’s Books of 2015.  Way back in September, we spent a day at the Times looking at over 2,000 books before selecting ten for the honor. Unlike other awards such as the Caldecott where the whole book is considered this one is for artistic merit alone. Here we are at work at the start of the day. A lot of books, right? 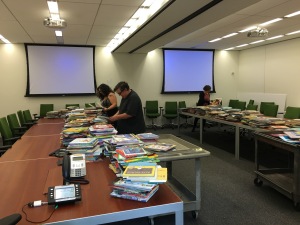 We then had to wait till the end of October for the list to be announced, keeping the fact that we’d been on the jury secret along with our choices.  That was hard!  And then there was yesterday’s breakfast ceremony where the illustrators of the books we selected were honored. It was wonderful indeed (and poignant as we had selected two books that featured the Eiffel Tower). Here are a couple of photos from the day, courtesy of Times photographer Earl Wilson. 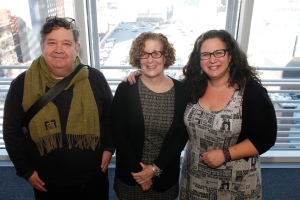 And here is the jury: Frank, myself, and Marjorie.

I am surprised not to see more about Edward Carey’s Iremonger Trilogy, the last of which — Lungdon — has just been published. I first learned of it after reading an enthusiastic New York Times review for the first volume, Heap House. (I see now that it got several starred reviews and ended up on many 2014 best of the year.) I got my hands on it right away and then couldn’t wait for the second which came out this spring. Having just finished the final book, I can say that the whole trilogy is terrific.

The story is of the Iremonger family, who live in the huge and sprawling Heap House, outside of London, in an alternate Victorian steampunkish, gothic, fantastical universe. This singular and snobbish family oversee the heaps, piles of trash from the city of London (or Lungdon as they call it) from which they are exiled. They are a harsh family with a very odd aspect —  all have “birth objects,” things they must keep near them at all times. Among them is Clod who has a unique condition — he can hear the objects. His birth object, for example, a universal bath plug, repeatedly mutters “James Henry Hayward.”  And into the world of the Iremongers comes Lucy Pennant, a girl from the city who arrives to work as a servant at the House. Over the course of the three novels, the world of the Iremongers and the residents of London are changed forever.

Told through a variety of voices, the story is rich and compelling. Carey’s world building is superb. These Iremongers and Heap House reminded me again and again of the equally weird world of Mervyn Peake’s marvelous Gormenghast books. The characters are similarly strange, the language ornate and original, the place fabulously described, and the plot riveting. In addition to being a terrific read, the books themselves are gorgeous, full of Carey’s art. Dark at moments, emotionally charged at others, this is one superb series.

This says it. Please watch, remember, honor, celebrate, mourn, most of all — don’t forget. More about the video here.

A Tantalizing Hint from Philip Pullman

I am going to try to pierce one veil right now. What can you tell us about The Book of Dust?

I will tell you … that I am writing it. OK, I’ll tell you it’s about Lyra—Lyra at a different stage in her life. It’s not a prequel or sequel. It will be a companion novel, if you will, to His Dark Materials, though that story is finished. As I go, I’m discovering things all the time about Lyra, about daemons, about dust, about the whole universe. It’s exciting for me.

From this comprehensive and fascinating Slate interview.

Thus in my early years I consumed African literature in a mostly oral form. Every night my father would tell us stories that his mother had told him in his childhood, stories of the goings on in the animal kingdom, often about Tortoise but other creatures featured. The stories were told in a multimedia format. There was speech and singing and call and response. There was also a popular story-telling TV show that I watched called ‘Tale’s by Moonlight,’ whose stories gave me nightmares.

From Chibundu Onuzo‘s What I read growing up in Lagos

The general lack of a reading culture and high levels of poverty contribute to the fact that books don’t sell in high volumes in bookshops in most of Africa. So, publishers rely on the government to buy books for children to read in schools as supplementary reading material. While it is good for the government to buy books for schools that can’t afford them, there is a price to pay. For a book to be bought by the ministry, it has to be approved as “suitable” by a board people who are mainly educationalists. This raises the issues of what then constitutes a “good” or “suitable” book.

A few weeks back I was in touch with Philip Pullman about something (possibly taking a sabbatical in Oxford if you must know:) and he ended by saying there would soon be some “interesting” news. Well that news is out and it is more than interesting, it is thrilling. The BBC has green-lighted a new mini-series of Pullman’s His Dark Materials trilogy, starting with the first one; in the US it is known as The Golden Compass. I’ve long felt that a mini-series was ideal for a screen adaptation, especially after the disappointing movie. I loved the National Theater’s version, the full-cast audio production (my go-to comfort listening), and the first graphic novel version that recently came out. What with all the other wonderful recent fantasy mini-series, it seemed overdue for the right people to do this one. And now they will!  From the Variety piece:

“His Dark Materials” is the first commission from Bad Wolf, a U.K./U.S. production company founded by former BBC executives Jane Tranter and Julie Gardner, and co-sited in South Wales and Los Angeles. The show is New Line’s first move into British television. The series will be executive produced by Pullman, Tranter and Gardner for Bad Wolf, Toby Emmerich and Carolyn Blackwood for New Line Cinema, and Deborah Forte for Scholastic.

Pullman said: “It’s been a constant source of pleasure to me to see this story adapted to different forms and presented in different media. It’s been a radio play, a stage play, a film, an audiobook, a graphic novel — and now comes this version for television.”

He added: “In recent years we’ve seen how long stories on television, whether adaptations (‘Game of Thrones’) or original (‘The Sopranos,’ ‘The Wire’), can reach depths of characterization and heights of suspense by taking the time for events to make their proper impact and for consequences to unravel. And the sheer talent now working in the world of long-form television is formidable.

“For all those reasons I’m delighted at the prospect of a television version of ‘His Dark Materials.’ I’m especially pleased at the involvement of Jane Tranter, whose experience, imagination, and drive are second to none. As for the BBC, it has no stronger supporter than me. I couldn’t be more pleased with this news.”