…at least according to someone or someones, I’m not quite sure who.

I happened to notice some tweets about this yesterday so went looking. The 100 titles were announced by Nicolette Jones on a major television show featuring celebrities in and outside the British children’s literature world.  Evidently there is more about it in Jones’ Sunday Times article today, but since it is behind a paywall, I haven’t access so haven’t been able to find out who made the selections, criteria, etc. Was it Jones, a panel, who and how? If anyone can tell me how to find out, I’d appreciate it.

It is the usual eclectic mix that any such list always is with quite a few old chestnuts including my beloved Alice’s Adventures in Wonderland at #12 (out of 100). But one big, shocking missing item was Philip Pullman’s Northern Lights (in the US it is known as The Golden Compass). Here are some of the tweets about that: 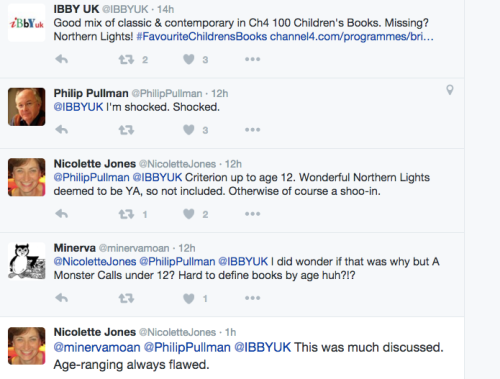 This seems a very strange decision to me given some of the others on the final list that seem equivalent to the Pullman as far as age range goes. In addition to Patrick Ness’s and Siobhan Dowd’s A Monster Calls there are Philip Reeve’s Mortal Engine titles, the latter Harry Potter titles, and Ursula Le Guin’s Earthsea books to name some I am familiar with (there are others I wonder about too, but haven’t read). Most puzzling and why I’d like to know more about the selection process.

Britain’s Book Trust did something similar — that is, create a list of 100 favorite children’s books —  resulting in a very different list, one that does include His Dark Materials. They also provide information about how they came up with their titles, something I’ve been unable to discover about the one revealed yesterday.