In a previous professional life I specialized in technology education. In the early 1980s I became very intrigued in the educational potential of personal computers and started a second masters (the first was in international education coming off my Peace Corps time) in computers and education at Columbia University Teachers College. I was in one of the earliest cohorts for the program and it was a heady time. Having always struggled with math as a child I was terrified about programming, but it turns out I was good at it.

While we worked in more standard-for-the-time languages (in particular, Pascal, for you coding historians), the one that was really the focus of our interest when it came to kids was Seymour Papert‘s Logo. It was a programming language based on kids doing, constructing their own understandings. I loved, loved, loved it. My current school brought me to them and created a special position for me. I taught whole grades Logo, did animation with interested kids, was an adjunct instructor for Logo at NYC and Columbia, and explored writing and research on those early pre-web computers. My very first published article was “Empowering Young Writers with Technology.” 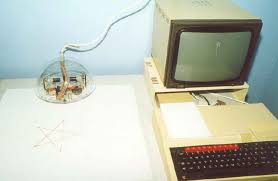 We even had a real robotic turtle!

Wherever I was Papert’s ideas were at the front of everything related to this. Many whom I connected to had worked directly with him. We all saw Logo and the ideas around it as having the potential to revolutionize education — to have kids construct their own learning, create their own theories, do it for themselves rather than have it done to them. His book, Mindstorms, was constantly referenced, a bible for us.

I wrote papers. I attended conferences. One of the headiest was Logo 86 at M.I.T. where I presented a paper with another enthusiast, “The Second Revolution 1986.”  (The premise was that Dewey et al were the first revolution in education and Papert and Logo were the second.)  I’d read and revered Papert and finally got to see him at this conference.

(That’s me sitting on the left:)

As personal computers caught on in school my interest in using them in writing and researching grew replacing my Logo focus. I was invited to be part of a group of teachers launching the first online teacher place, Scholastic Network (on AOL as it was before the web), I did work with the Library of Congress as they began digitizing their holdings. and —as the web grew —  fell completely into the world of children’s literature. But I’ve always remembered that time and the ideas that Papert promoted. That children could do computing — they are today with all the coding around!  That kids should construct their own learning — that is still important to many of us though somewhat muffled due to the testing mania, sadly.

I celebrate Seymour Papert a major influence in education and in my own life too.