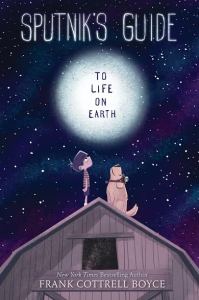 I’m delighted to be the first stop on the blog tour for Frank Cottrell Boyce’s Sputnik’s Guide to Life  (which happens to be shortlisted for the 2017 Carnegie Award, similar to our Newbery). I’ve a long history with Frank starting with a long-ago Skype visit with my class when he had to go to a neighbor to do it. A few years ago, we met at the Edinburgh Book Festival. That was a golden moment for me!

Additionally, Frank did a stellar job as our final SLJ Battle of the Kids’ Books Judge in 2013 (under very challenging personal conditions, as I recall.) My favorite book of his to date (Sputnik is giving it a running) is Cosmic, one I’ve read aloud to my class every year. It is the only contemporary book I reread this way; however, this year I may read Sputnik instead.

Frank was kind enough to answer a few questions for me and for you. Here are the questions and the answers.

Monica: Prior to Sputnik’s Guide to Life my favorite of your books has been Cosmic.  In both books the themes and ideas are beautifully extrapolated from the idea of the cosmos — of something beyond ourselves on earth. What is it that so appeals to you about space?

Frank: I guess mostly it’s because I’m off that generation that came into consciousness just as man was first walking on the Moon. I genuinely thought that once Neil and Buzz had walked there, we would all get to go.  Growing up for me was largely a slow realisation that I was not – after all – living in the Space Age.  The mobile phone age seems a poor substitute for jet packs and space stations.  I write about space purely so I can carry on playing astronauts in my head

Monica: First a tangent — a child in the 1960s, my family had a Dalmatian called Spotnik for obvious reasons. Now, did your idea for this Sputnik start from the real Latka? That it would be an alien presenting as a dog? Do you have a dog yourself? Wondering about how you made Sputnik so doggy , so wry (and funny), and so wise in a spiritually-important-sort-of-way.

Frank: I don’t have a dog! And I’ve never had one!  This is another case of me using writing as a way of grabbing hold of the things which life has cheated me of!  Can I say by the way that Sputnik is an utterly brilliant name.  Whoever came up with that should have a cake named in their honour.  I always thought about Laika and how lonely she must have been. I also had that thought – if you met a dog in a rocket you would naturally assume that the dog built the rocket,  wouldn’t you?  And if you came to earth and found that dogs had large biped mammals who washed them and fed them and CLEANED UP THEIR POOOH!! You would DEFINITELY think dogs were the dominant species.

Monica: There are more and more books for children featuring aging relatives with Alzheimer’s. What I especially appreciated about this one is that it is positive and moving in a realistic way. Can you speak to this without giving too much away of the plot?

Frank: My Dad has dementia and I’m spending a lot of time with him.  Obviously it’s very sad to see him so confused most of the time. But I’m also aware that when he is trying – and failing – to make sense of things, he is being very creative.  When he tries to put the sights and sounds of his day together into some sort of order, it is very like the process of writing a book.  So we have something very much in common.  He’s also very focussed on trying to be happy.  He’s very refreshing to be with in some ways.  And of course we’re spending more time together than we have since childhood.  I’m more his son than I ever was before.  We must become as little children and that’s what’s happening.  So I wanted to celebrate that.

Monica: I love your portrayal of parents. There is that idea that, in children’s books, you have to get rid of the parents so the kids are able to do it all themselves. While your young characters do it for themselves, the kind adults around them, often parents, are active too. They don’t just disappear. I was struck by the foster family in Sputnik; they are wonderful, sensible, knowing, and caring. What inspires these parental representations for you?

Frank: They’re obviously self-portraits! You’re completely right about parents in children’s books – they nearly always die or go to war in order to get the adventure going.  Remember James (in the Giant Peach)’s parents being “eaten by a rhinoceros”. One of the things I loved about Chitty Chitty Bang Bang is that the adults are on the adventure too.

I enjoyed my children’s childhood more than I enjoyed my own – so why shouldn’t I drop them off the list.

Monica: Lastly, you seem to have a sweet spot age-wise with your young protagonists. They all seem similar in age. Am I wrong? Sorry if so. Otherwise, I’d love to know what attracts you to the age of your protagonists. Any thoughts on doing something YA or a picture book?

Frank: I guess they all are the same age. I never noticed that.  Now you’ve shone a light on it,  I will probably run away and hide and I’ll never write about it again.

Thanks so so much, Frank, for answering these questions. Some day I hope we meet again!

Here’s more about Sputnik’s Guide to Life on Earth:

Award-winning author Frank Cottrell Boyce returns with another one-of-a-kind story of heart, humor, and finding one’s place in the universe.

Prez is still learning to fit in at his new home when he answers the door to meet Sputnik—a kid who is more than a little strange. First, he can hear what Prez is thinking. Second, he looks like a dog to everyone except Prez. Third, he can manipulate the laws of space and time. Sputnik, it turns out is an alien, and he’s got a mission that requires Prez’s help: the Earth has been marked for destruction, and the only way they can stop it is to come up with ten reasons why the planet should be saved.

And here are all the dates and stops for the blog: