Something Else that Happened on July 4th

July 4 (F) Atkinson brought over to my rooms some friends of his, a Mrs and Miss Peters, of whom I took photographs, and who afterwards looked over my album and staid [sic] to lunch. They then went off to the Museum, and Duckworth and I made an expedition up to Godstow with the three Liddells [Alice and her two sisters]; we had tea on the bank there, and did not reach Ch. Ch. [Christ Church] again till quarter past eight, when we took them on to my rooms to see my collections of micro-photographs, and restored them to the Deanery just before nine.

[On which occasion I told them the fairy-tale of “Alice’s Adventures Under Ground,” which I undertook to write out for Alice, and which is now finished (as to the text) though the pictures are not yet nearly done.  February 10, 1863]

From Charles Dodgson’s (aka Lewis Carroll) diary entry of July 4, 1862 with notes he came back and added later as he was working on the book. (From volume 4 of the Lewis Carroll Society’s edition annotated by Edward Wakeling.)

Filed under Alice's Adventures in Wonderland, Lewis Carroll, Other 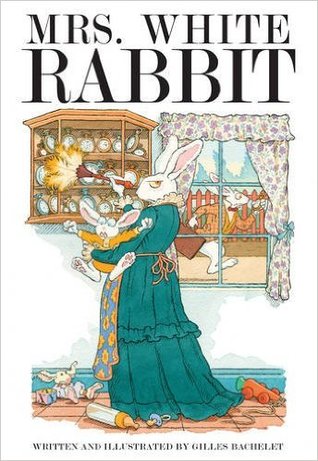 In case you don’t know me, I’m a Carrollian; that means, Alice’s Adventures in Wonderland and Through the Looking-Glass are beloved books of mine. This blog is named after this obsession and the shrinking Alices in the banner are ones I drew long ago in my days as an aspiring illustrator. (More can be seen here.) I speak, write, do, and seek out all things Alice all the time. My current WiP is centered around the real story behind the fictional ones. And because of this obsession I’m always eager to see new interpretations of Carroll’s characters, setting, and words. Sadly, too many miss hugely (Tim Burton’s Alice films are the latest travesties), but some really capture Carroll’s wit in unique and original ways. Such a one is French book creator Gilles Bachelet in his delightful oversized picture book, Mrs. White Rabbit.  I picked up a copy of this several years ago in Germany and was over-the-top excited when publisher Anita Eerdmans told me that Eerdmans was bringing it out in the US.

The text is Mrs. White Rabbit’s tired, frustrated, teeth-clenched, and hilariously dry diary entries. These are wittily brought to life in illustrations large and small. There’s her oldest Beatrix who, after considering a wide variety of occupations, has decided she wants to be a supermodel and is spending all her time on the scale. A double page spread shows the worried mother’s 100 different recipes for carrots with the sad note: “nothing will do.” Alice makes an appearance (we see the poor woman vacuuming around her huge foot) and Mr. White Rabbit suggests hiring her as a babysitter. “Another one of his brilliant ideas? Who wants their children looked after by someone who doesn’t know how to stay a reasonable size?”

Poor, poor Mrs. White Rabbit whose husband is far too busy at the palace to help. She sadly writes : “My life is quite different from what I once dreamed about.  I would have loved to be a writer. To invent stories full of marvelous places and extraordinary characters. But how could I find inspiration in my dull everyday life?”  Of course, the illustrations show both the mundane and the marvelous.

This book is wonderful to look at — the illustrations are full of references to the original book as well as full of other wry tweaks playing off the text. There are great easter eggs through out; for example, I’m guessing the twins Gibert and George are a reference to the real-life artist pair. While those who know the original story will delight in this clever take, those who don’t will also enjoy the detail art and understandably grumpy view of this fairy tale rabbit spouse.

At the end, while Mr. White Rabbit rushes to fix things with his wife — the final image does not suggest he is successful. Perhaps in the sequel — Mrs. White Rabbit Runs Away?— we could see her having some of those fun adventures she dreamed of! 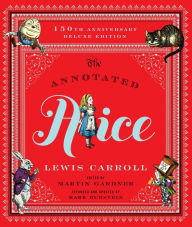 This past Saturday I was privileged to present “Alice and Her Intended Audience” at the Fall Meeting of the Lewis Carroll Society of North America along with three former students. After giving an overview of my teaching approach to the book — consisting of reading aloud, games, poetry recitations, tea parties, caucus races, and more — I turned the floor over to the students. First Jake, now in 7th grade, read his “Chaper 5 1/2: House of the Rabbits.” He explain that he had wanted to explore Carroll’s language in his own way. The result is a brilliant and unique creation; he begins by making the White Rabbit a female, provides generaous adventure, and some elegant original poetry as well. I hope the story can be published in total one day (perhaps in the Knight Letter?) for all to see. He was followed by 5th graders Zach and Katalin who described their favorite parts of the unit from last year (mostly playing croquet and the caucus race) and then performed their part of last year’s radio play. The three were the hit of the meeting!

For those in attendance and others interested here are a few links:

The LCSNA will be holding its fall meeting at NYU’s Bobst Library on Saturday, October 15th. With some former students (two 5th graders and a 7th grader), I will doing a presentation on “Alice and her Intended Audience of Children Today.” The children will give their perspectives of their experiences with the book while in my 4th grade class. Then the 5th graders will do a live performance of their section of last year’s class’s radio play while the 7th grader will read an additional chapter he wrote for the book the year he was in my class, explaining just what inspired him. The other presentations look great too. From the LCSNA website:

The exciting Fall 2016 meeting will take place at the Washington Square campus of New York University (home of the Berol Collection of Lewis Carroll, and the LCSNA archives) on October 15th. Fales Library director Marvin Taylor will speak about the exhibition they mounted in the Bobst as part of the Alice150 festivities, “‘Go Ask Alice’: Alice, Wonderland, and Popular Culture.” Monica Edinger, keeper of the well-regarded blog “Educating Alice,” and some of her students will give us a presentation about her use of Alice in her elementary classroom. Matt Demakos will speak about his research concerning “The Walrus and the Carpenter.” Children’s Literature specialist Dr. Jan Susina will give a talk tentatively titled “Alice in the Academy: The Alice Books in the College Curriculum,” Dana Walrath will talk on her illustrated novel Aliceheimers and her use of Alice in making sense of the world of Alzheimer’s. Read the full agenda for details.

It was 152 years ago yesterday that the Reverend Charles Dodgson, aka Lewis Carroll, first told his tale of Alice. Since then its elements have been reinterpreted in innumerable ways, one being Jefferson Airplane’s druggy anthem “White Rabbit.”  I was a teen the year it came out —1967— and not a fan. That misunderstanding of my favorite book from childhood as something that was the result of its creator’s use of drugs annoyed me then and still today. But I have to admit that I’ve mellowed about the song itself, especially when I see inventive covers for it.

Filed under Alice's Adventures in Wonderland

In the Classroom: The Alice in Wonderland Radio Play

One of my favorite books is Lewis Carroll’s Alice’s Adventures in Wonderland. Every year I read aloud the book with my 4th graders reading along from my large collection of illustrated editions. Along the way the children join the chorus of the songs, participate in a caucus race, and play a spot of croquet. Most years we end with a project and this year it was a radio play. My initial thought was to do a sort of audio book, but when I mentioned it to a colleague she said, “a radio play, of course” and I was immediately hooked.

First I found a 1937 script using language directly from the book and adapted it for my class. (I cut it way, way, WAY down and adjusted it so we had different scenes, each with its own narrator. Each scene was 2-3 minutes with the whole play under 20 minutes in total.) Then I introduced the concept to them. One of the most important element that would make this different from an all-cast audio book was sound effects and so I found a couple of fun videos that gave a sense of this. The children worked enthusiastically in groups to prepare and did a fabulous job. Not only are their sound effects inventive and clever, but they went beyond what I expected with their voices and accents. Indeed the whole thing is a delight. One of the thing I like so much about it is how well the children’s performances show their deep understanding and appreciation of the book itself. I like to think Lewis Carroll would approve.

To learn more about the project and listen to the radio play itself please go here.

Filed under Alice's Adventures in Wonderland, In the Classroom

As we in the US await the results of the Iowa caucuses, here’s a look at Lewis Carroll’s take on caucuses. (First part inked and illustrated by moi): 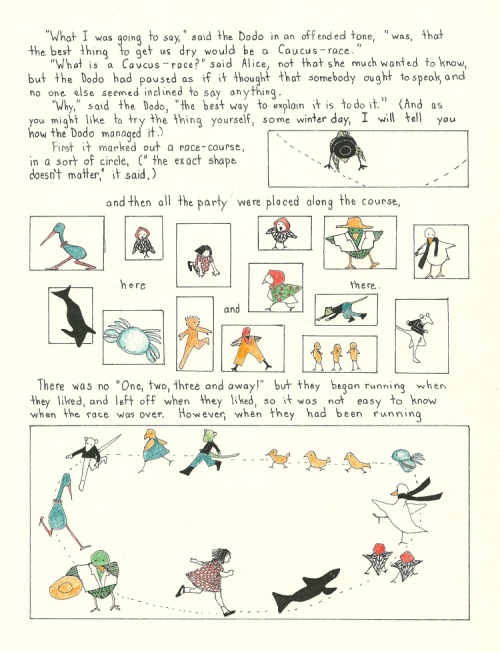 and were quite dry again, the Dodo suddenly called out ‘The race is over!’ and they all crowded round it, panting, and asking, ‘But who has won?’

This question the Dodo could not answer without a great deal of thought, and it sat for a long time with one finger pressed upon its forehead (the position in which you usually see Shakespeare, in the pictures of him), while the rest waited in silence. At last the Dodo said, ‘everybody has won, and all must have prizes.’

‘But who is to give the prizes?’ quite a chorus of voices asked.

‘Why, she, of course,’ said the Dodo, pointing to Alice with one finger; and the whole party at once crowded round her, calling out in a confused way, ‘Prizes! Prizes!’

Alice had no idea what to do, and in despair she put her hand in her pocket, and pulled out a box of comfits, (luckily the salt water had not got into it), and handed them round as prizes. There was exactly one a-piece all round.

‘But she must have a prize herself, you know,’ said the Mouse.

‘Of course,’ the Dodo replied very gravely. ‘What else have you got in your pocket?’ he went on, turning to Alice.

‘Only a thimble,’ said Alice sadly.

‘Hand it over here,’ said the Dodo.
Then they all crowded round her once more, while the Dodo solemnly presented the thimble, saying ‘We beg your acceptance of this elegant thimble’; and, when it had finished this short speech, they all cheered.

Alice thought the whole thing very absurd, but they all looked so grave that she did not dare to laugh; and, as she could not think of anything to say, she simply bowed, and took the thimble, looking as solemn as she could.

If want to see more of my Alice illustrations go here.

Filed under Alice's Adventures in Wonderland