The Story of Dido Elizabeth Belle 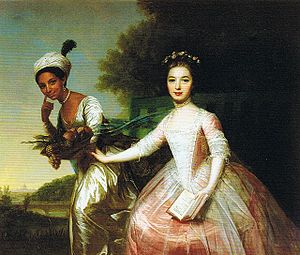 I’ve long been interested in the story of Dido Elizabeth Belle who lived in the late 18th and early 19th century. The child of the British admiral John Lindsay and an enslaved African woman (possibly named Maria Belle), she was sent to Kenwood House, the home of her great-uncle, William Murray, 1st Earl of Mansfield as a young child.  The earl was already raising his great-niece, Lady Elizabeth Murray who was the same age as Dido and so the two girls grew up together with Dido evidently becoming Elizabeth’s personal companion.  While in his rulings as Chief Justice of England and Wales, Lord Mansfield indicated his distaste for the institution of slavery, in his own household there is evidence that Dido was treated in demeaning ways, clearly not viewed as equal to Elizabeth and others in the family.  You can learn more about her here and here.

Now there is a movie about Dido, Belle, due to be released here soon. Variety has given a favorable review, noting that while it will appeal to Austen fans it doesn’t shy away from addressing the harsher topic of slavery.  The Guardian also weighed in, And below is the trailer. I’m eager to see it and learn for myself as to how successful it is.

7 responses to “The Story of Dido Elizabeth Belle”